Every day we’re seeing more evidence that we live in a very interconnected world.  Overnight Apple released a revised earnings guidance letter, which is a fancy way to say “we didn’t sell as many iPhones as we expected.” This apparently caught the entire civilized world by surprise, especially since many folks have lost track of the reality that not everyone can afford a thousand-dollar phone. As a result, Apple stock futures tumbled overnight.  And along the way, they apparently dragged down – foreign currency pairs? 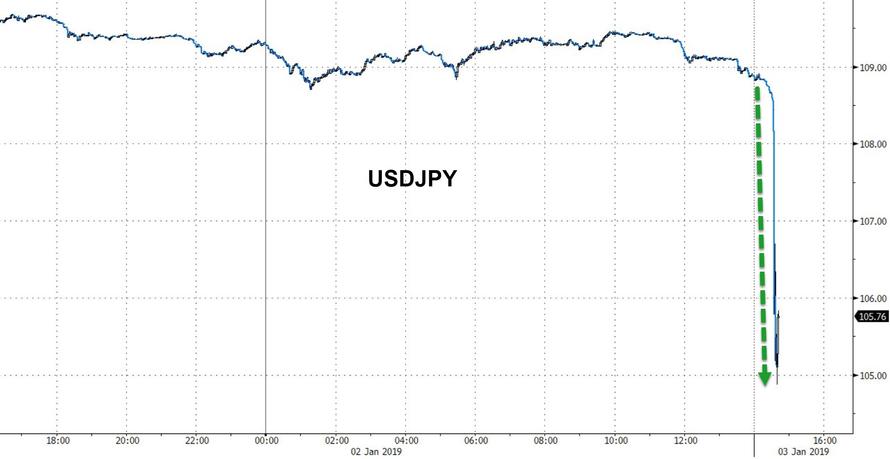 On this chart, down is bad for the US Dollar and good for the Japanese Yen.  So what this says is investors – or at least currency traders – saw the prospect of a decrease in Apple revenue as threatening the value of the US Dollar.

Other currency pairs involving the US Dollar also “flash crashed” including the Australian Dollar and Chinese Yuan. Such a gyration could be expected to drive investors and traders toward safe havens, and it did.   Overnight gold hit a 6-month high and looks to open above yesterday’s close in New York this morning.

Worth noting is this is Apple’s first such downward guidance in 15 years.  Given that this bull market is 9 years on, it’s probably as close to a black swan event as we’re likely to see so close to the holiday season.  Your Gold Enthusiast thinks this will add more concern to investor anxiety, but won’t be enough to push the market over the edge.  For that, we’d probably need poor earnings reports in January, and more angst out of the EU. We’ll have to wait about 6 weeks to see if the first of those shoes drop.

DISCLAIMER: The author does not trade currency or currency pairs, and so has no positions in those mentioned in this article.  The author is long the gold miners via small positions in NUGT and JNUG, with no plans to trade those in the next 48 hours.

The Greatest Trading Book Ever Written