The rally from the December S&P 500 bottom has so far been one of the strongest and quickest, compared to previous recovery periods going back to the 1950s. This trend in stocks has not only broken historical patterns, which have often seen a test of the initial low before a new uptrend has been formed. But also emboldened people to once again pile into selling volatility on the notion stock will continue to calmly grind higher.

Last month I noted how there was a dramatic increase in selling or shorting volatility or VIX-based products, and it has only increased since. 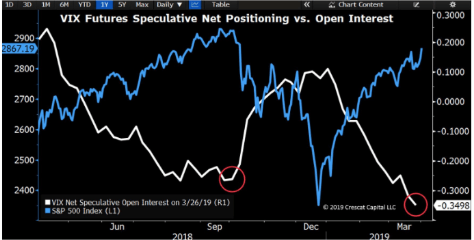 In fact, right now the size of VIX short positioning by speculators is more extreme than it was just prior to the market selloff in Q4 2018, as money managers insist on picking up pennies in front of a steam roller. 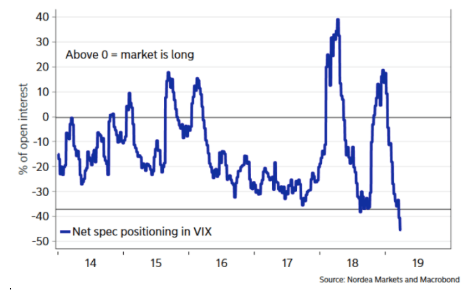 I guess they didn’t learn from last year when stocks also went vertical before an implosion, which took several VIX related products, and those shorting volatility, to the morgue.

The VIX is now starting pinch those sellers again. Since the Dec 24 high of 36, it dropped to a pre-teen 12 handle. This compression of volatility has happened quite a few times over the last 10 years, telling us that the S&P 500 stocks that are experiencing a degree of over-confidence as expressed by the Volatility Index.

But in just the past two days, with the market down a mere 3% the VIX has surged over 40%; the 3rd largest percentage two-day gain in the past five years.

The money being allocated to shorting volatility is huge, near the order of $300 billion and is magnified by the leveraged nature of the asymmetrical risk.

This could once again be setting up a case where the tail wags the dog where selling accelerates, and volatility rises, creating a loop-back effect with things spiraling out of control.