Sign Up to See Ratings...FREE!
We have 9 different ratings for every stock to help you appreciate its future potential. You can unlock it all now. Just click the link above.


in industry
See All 'A' Rated Buy Stocks

Below are key valuation metrics over time for SRG. 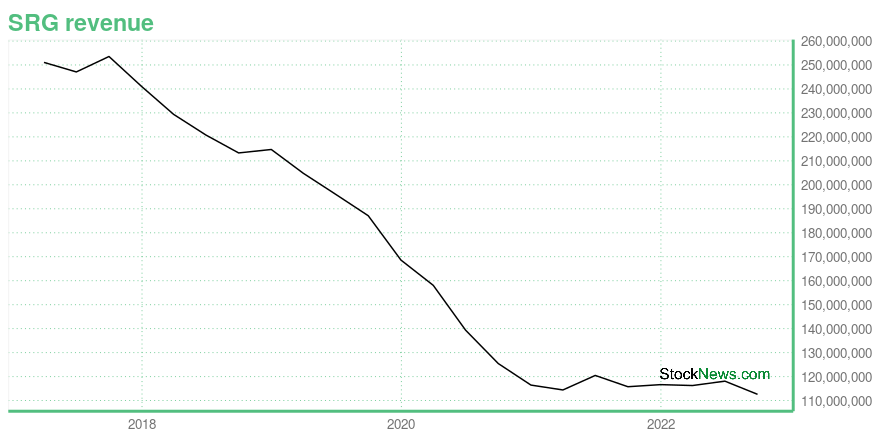 The table below shows SRG's growth in key financial areas (numbers in millions of US dollars).

The “Quality” component of the POWR Ratings focuses on 31 different factors of a companies fundamentals and operational strength. Here are some key insights as we drill into the specifics of these quality attributes.

The table below shows SRG's key quality metrics over time.

Seritage Growth Properties manages a portfolio of retail real estate properties which it leases to tenants throughout the United States. The company was founded in 2015 and is based in Hoffman Estates, Illinois.

Most Popular Stories View All

• 2 Stocks Under $50 Worth Snapping up Right Now

• 3 Stocks You'll Want to Leave out of Your Retirement Portfolio

• The Worst Stock to Buy During Times of High Inflation

• Bears Back in Charge...What Happens Next?

Latest SRG News From Around the Web

Below are the latest news stories about SERITAGE GROWTH PROPERTIES that investors may wish to consider to help them evaluate SRG as an investment opportunity.

Want to see what other sources are saying about Seritage Growth Properties's financials and stock price? Try the links below: