As discussed, the popular volatility product the Barclay’s iPath S&P 500 VIX (VXX) will cease trading and be delisted this coming Tuesday, January 29th.

As explained, this was a planned event as Barclay’s originally structured the product as an Exchange Traded Note with a bond-like feature of a10-year maturity.  They probably used this relatively short time frame, as the VXX was the very first volatility or VIX-based product, and they may have been unsure of whether it would be successful.

Well, it turned out to be a smash hit as trading volume now averages over 10 million shares a day, making among the top 50 most active. And during a period of heighted volatility, it has seen over 70 million shares a month. 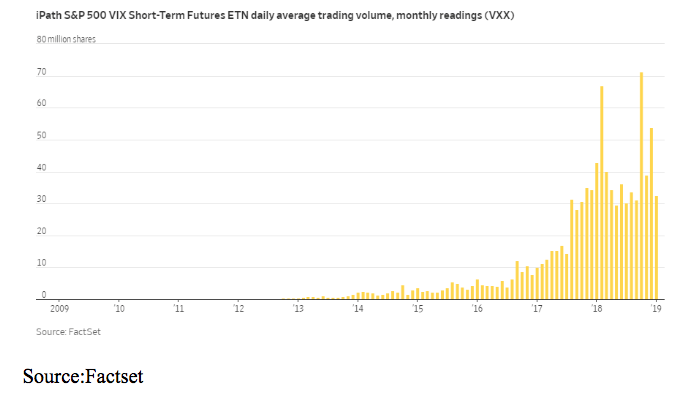 Given the success, Barclay’s was not going to let this cash cow simply disappear. So about a year ago, it formed its replacement; same name, new ticker of VXXB.

VXXB will have essentially the same structure and fees as VXX will now have a 30-year maturity. One notable new feature is that VXXB will have an “issuer redemption” clause, allowing the bank to redeem the ETN for the cash value of the product at any time. These provisions allow the product issuers to shut down their funds if they wish, without cause, and pay the shareholder the share’s value at that point in cash.

They may have included this as a pre-emptive move in case they sense another scenario such as occurred in February of 2018 when several VIX ETN’s imploded.

Even though the shuttering of VXX has been known and the transition over to VXXB should be smooth, there could be some momentary chaos and market dislocation.

The VXXB has been trading for over six months, and has seen a steadily increasing in volume. Assets under management are now at around $350 million.

But it’s notable that VXX has also seen an increase in assets, going from about $700 million at the beginning of the month to the current $900 million.  For reference, the VXX assets peaked at $2 billion last February.

But, $900 is nothing to sneeze at. When that money gets distributed, any VXX shares of record next Tuesday, the 29th, will be converted to cash on the 30th, and will need to go somewhere.

That’s when things could get interesting;  when Barclays cashes out those shares it (or its counterparties), it will need to close out the hedges that are used to insulate the Exchange Traded Product issuers from VXX’s directional moves. Those hedges will be immediately closed out on the 29th—institutions are not going to tolerate $900 million dollars worth of VXX directional risk for even one day.

If the asset number stays at $900 million, and all of the hedges are in VIX futures, then around 20% of the normal daily volume for the February and March VIX futures would be sold at the end of the 29th.

This could have a ripple effect or even another case of the tail wagging the dog as we saw during last year’s Vixpocalypse.

Barclay’s and brokers firm, like Fidelity, have been trying to ease the transition by facilitation a swapping of VXX shares into VXXB for free.

While I’m sure most institutions, hedge funds, and professional traders are aware of and have made plans for transitioning their positions, there could be just enough retail traders that get taken unaware to create some momentary chaos.