We know the two main combatants in the trade war are China and the United States. But there is growing evidence that an increasing number of nations are becoming collateral damage.  And that doesn’t bode well for the global economy or stock markets.

One country that can be considered a ‘canary in the coal mine’ for a global recession is South Korea, and it just issued a major warning sign.

South Korea is often seen as a leading indicator of economic activity due to its heavy reliance on exports and production. If the country’s exports are slow, it often signals a weakening global demand.

Last week, its finance minister released data that both industrial production and exports turned negative during the month of December. The last time that occurred was back in 2015-2016 and we had predicted a decline in global earnings. 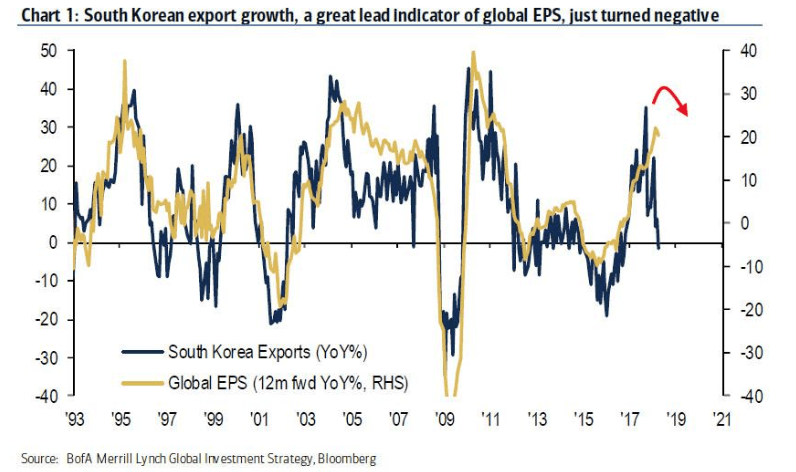 While the 2015-2016 period didn’t turn into an economic recession, it did lead to what is referred to as an “earnings recession” which led to a worldwide stocks sell-off that included the U.S which saw the S&P 500 tumble by some 23% over a three-month period.

While industrial production growth is still rising in the United States, it is showing signs of slowing and turn down in South Korean industrial production, which also typically leads growth — a harbinger that the U.S. may start to experience further decelerations in the months ahead.

So far, just 5% of the S&P 500 companies have reported earnings and they’ve posted a mere 5.6% earnings growth.  That doesn’t leave much margin for misses to turn the number negative.

Based on what the canary is singing the bulls might want to hold their breath lest they find themselves wandering into a bear cave.