Did the Fed cave into the falling stock prices? And did that flip flop set the market up for further pain?

When Jerome Powell took over as the head of the Federal Reserve two years ago, he made several things abundantly clear; he thought prior monetary policy had been too easy for too long and was determined to normalize rates. He wanted to draw down the balance sheet, he would front run any possibility of letting inflation pressures build, and most importantly, he would let the whims or whines of the stock market (or the President) deter him from accomplishing those goals.

But as Mike Tyson famously said, “Everyone has a plan until they get punched in the face.” And that punch, which came in the form of a 20% decline and stocks and multiple tweets from President Trump, landed in December forcing Powell to throw up his hands and retreat to a more accommodative corner.

Powell’s pacific posture took form during the Dec 18 FOMC meeting when he acknowledged softer economic data would cause him to more data dependent in terms of the path of rate hikes.

The bigger backtrack was his reversal from a policy of having a balance reduction being on autopilot of $50 billion per month. Powell went from stating in October “I don’t see that changing” which caused a 600-point drop in the Dow till during the Dec 19 Federal Reserve meeting, “We wouldn’t hesitate to change balance sheet policy if needed” which sent stocks surging some 3% over the next two sessions.

The importance of the balance sheet, and the draining of liquidity, is something I’ve discussed here and can be illustrated in the chart below. 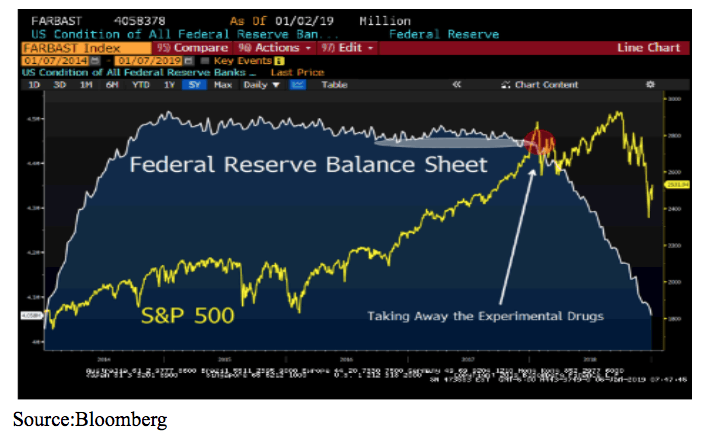 Powell learned the power of his words and pursued an even more dovish tome when he spoke at on Jan. 4 on a panel with former Fed heads Bernanke and Yellen— both of whom had been very market-friendly.

Suddenly statements such as, with the muted inflation readings that we’ve seen coming in, we will be patient as we watch to see how the economy evolves” had investors convinced a Powell Put is now in place.  Stocks rocketed up some 4% that day and are now up another 11% since.

But what if Powell’s flip is only setting the market up for a bigger flop?

Even if the Fed stands pat for the next six months the borrowing costs for both businesses and consumers has surged with short term money market yields. The economic destruction is far more than meets the eye.  The Fed has shown it is clearly walking in the dark.

But Powell has shown that his instinct is to be drawn to the light of a ‘normal’ monetary policy, and if data such as string employment and solid earnings provide the cover for more hikes the stock market better brace for another down round.