Texas Instruments (TXN) shares are up over 6% to $102 following its earnings report.  I think it represents a selling opportunity.

The company beat on the bottom line by $0.02 but missed revenues with a YoY decline.  More worrisome is the company lowered next quarters guidance by some 17% to $1.12 per share saying they see no end to the slowdown.

Other negatives include an increase in inventory from 131 days to 152 days, a drop in book-to-bill ratio to 0.98 ( a reading below 1.0 is considered negative) and a decline in operating margin.

Granted, the stock has sold off some 20% from the summer high, so it has some bad news built in.  But it still trades at 20x trailing eps, which were at peak earnings and a relatively high p/e for this cyclical sector.

Highlighting that the semi-cycle probably peaked last year, Texas’ CEO concluded the conference call by saying, “In closing, we believe after 10 quarters of year-over-year growth, the weakness we are seeing is primarily due to the semiconductor cycle entering a decline in demand.”

TXN may also be getting an extra lift on the coattails of better-than-expected numbers from other chip-related names STM, XLNX, LRCX. But they also indicated that demand isn’t likely to pick up in the foreseeable future.

Today’s surge in the group seems to be more a function of money rotating out of some cloud names, which had big gains and into the beaten down chips on the notion there is limited downside.  And throw in some short covering which is also squeezing prices beyond what is warranted.

The chart shows a resistance at the $102 level, which offers a good risk/reward entry point for establishing a bearish position. 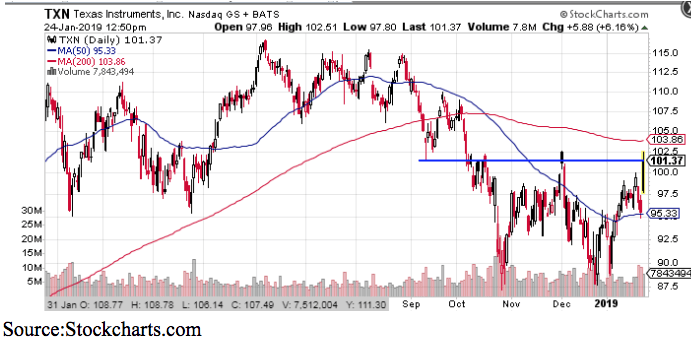 I’d keep the approach simple and buy puts outright.  I’m targeting a purchase of the March 100 strike puts for around $3.25 per contract.