After shedding some 40% of its value since the 2012 peak, and seemingly ceding its claim as best alternative to fiat currencies to bitcoin, gold has regained some of its luster over the past few months. Many investors think it will continue to shine in 2019.

The price of gold, after suffering a steep decline through most of 2018, has staged a nice recovery in just the past 3 months. There are several factors at work suggesting that it will make a move back above the 52-week highs. 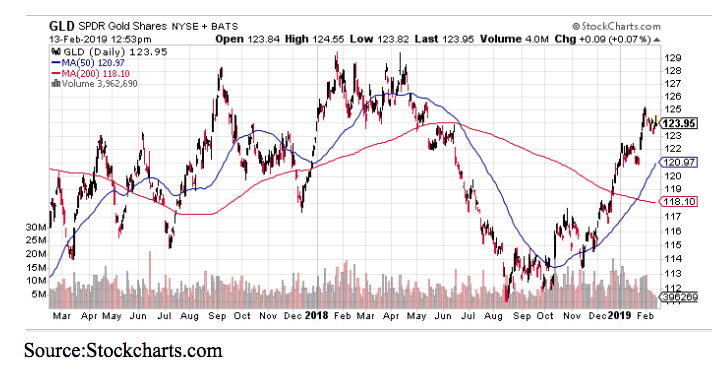 Many investors like to invest in gold as an inflation hedge. But in isolation, gold and inflation are not directly correlated. The reality is that interest rates, particularly real rates, are one of the primary drivers of gold prices.

The chart below highlights the 5-year Treasury rate, inflation, and gold. From 2016 through the middle of 2018, inflation rose from roughly 1% to nearly 3%. But yet gold traded lowered.

On the other hand, you can see a much higher correlation between interest rates and the price of gold.

Indeed, gold declined during the early part of 2018 — coinciding with a rise in rates and the perception that the Federal Reserve was on an intractable path of tightening monetary policy.

Higher interest rates make bonds, which have a high level of safety, a more attractive return than holding the inert metal which yields nothing.

Now that the Fed has backtracked rate hikes and drawdown, the balance sheet appears to be on hold for the rest of 2019, using gold as a store of wealth is a reasonable alternative to holding bonds with historically-low yields.

In fact, with many of the other developed nations’ sovereign bonds such as Germany and Japan actually having negative real rates of gold, which makes them even more attractive.

Another major positive force at work is the trend of various countries looking to reduce their U.S. dollar/Treasury holdings and replacing it by adding to their gold reserves.

Over the past year, central banks emerged as big buyers of gold, with purchases up almost 75%.  They acquired $27 billion worth of bullion, the most in almost half a century.

China has added to its gold reserves for the second time in two months, the first of such increases since 2016.  China is both the world’s biggest consumer and producer of gold. At the end of January, its holdings stood at 59.94m ounces, up from 58.7 in November.

Meanwhile, China’s holdings of U.S. Treasury securities fell for a fifth straight month to $1.14 trillion at the end of October, down 5% from the most recent peak in August 2017, U.S. government data shows. As the country’s economic turbulence put downward pressure on the yuan, Beijing likely sold dollar-denominated assets to shore up the currency, contributing to the decline.

That all points to China working to reduce dependence on the dollar, as its relationship with the U.S. is strained. Total foreign-currency reserves have been steady at just over $3T over the past two years, but the mix is shifting as the country sheds U.S. Treasuries.

Other countries, such as Turkey and Russia, have taken similar actions of reducing U.S dollar/Treasury holdings while increasing purchases of gold.

Bitcoin and cryptocurrencies were supposed to be the next revolution of money and a better alternative as a store of value.  It was especially attractive to many gold bugs who have an inherent distrust of fiat or paper money.

As this Google search of headlines shows, in 2017-2018, many owners of gold were swapping their holders for BTC. 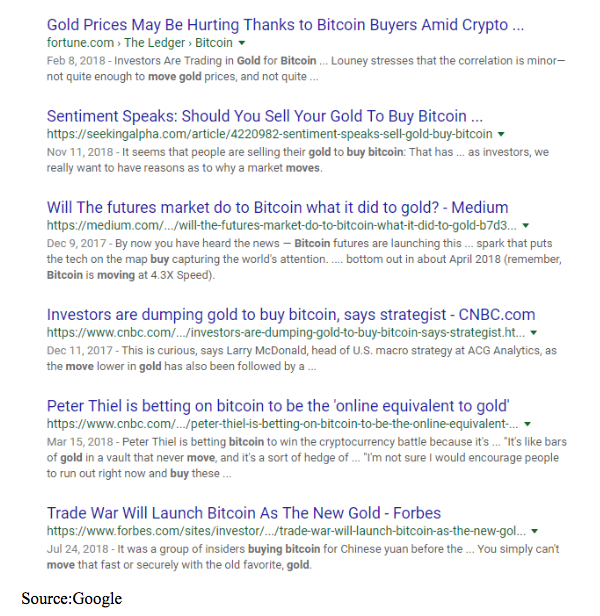 As the price bubble in cryptos bursted, that trend has reversed itself.  A recent survey by Fidelity, which was one of the first and only mainstream brokerage firms to allow holding BTC in their accounts, showed that the top holders of bitcoin now view gold as their favorite investment for 2019.

Uh oh. Maybe that last item isn’t too bullish at all.