Despite the near-record rally over past few weeks, investors have been pulling money out of stocks and piling it into cash.

The major indices have rallied almost 20% since their December low and money managers are seemingly using this opportunity to reduce equity exposure, especially in U.S. stocks.

According to a BankAmerica survey, equity allocations in February fell to their lowest level since September 2016, indicating a lack of conviction in the sustainability of the rebound.

Notably, the money isn’t being rotated into other asset classes such as real estate, commodities or even bonds, with a duration beyond 2 years. Instead, it’s piling up in cash; cash allocation rose to 44% percent, the highest since the 2009 financial crisis. 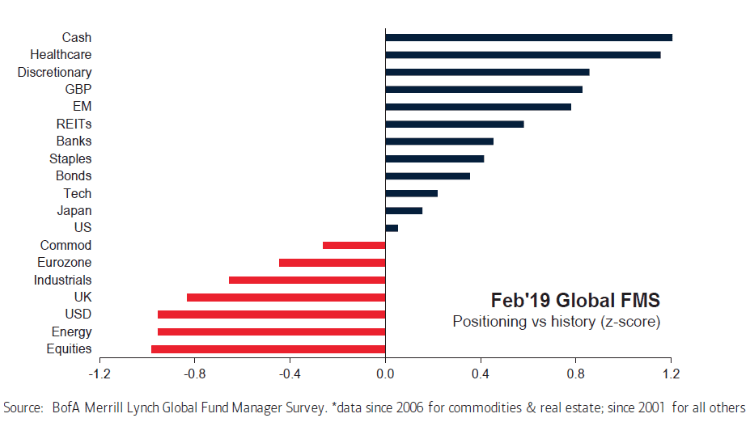 Indeed, the nature of the rally can best be described as a relief — having escaped what was shaping up to be bear market, and potential recession, rather than renewed optimism or bullishness.

Recent sentiment surveys, which now include the January rebound — from consumers to small business owners — all show a third consecutive monthly decline.

The nature of the relief, and just how much pessimism — and bad news had been built into the market — was predominately to the upside.  In fact, a Goldman Sachs study shows that this earnings season has the been the best for buying OTM calls, which have returned a whopping 88% vs the 11% gain over the prior nine years.

Despite all this allocation to U.S. stocks, it fell to its lowest in 9 months to 3% percent underweight, according to the BAML note.  In contrast, euro-zone equities saw a jump in allocation to a 5% overweight, ending an 18-month streak of investment cuts. Exposure to emerging-market stocks kept rising to a 37-percent overweight.

But again, the most notable shift has been into cash, which is now the highest level since the financial crisis. 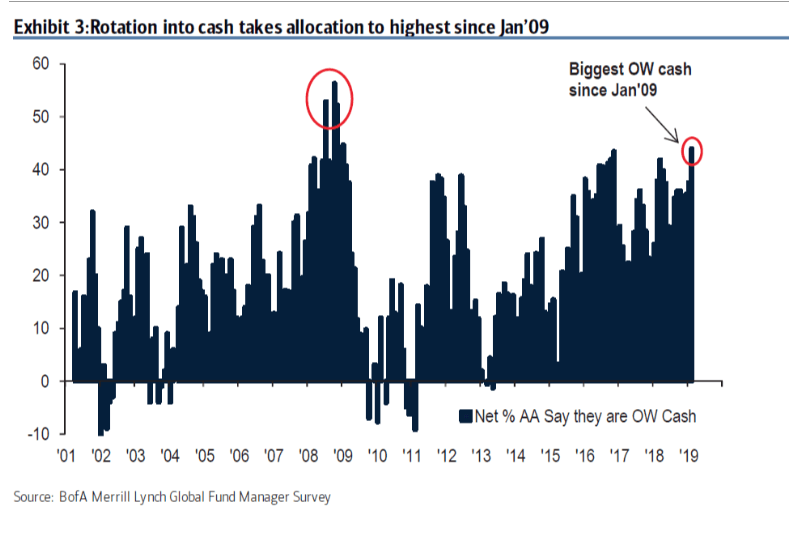 One explanation for› the move to the sidelines might be that the two main issues that had troubled the market during last Autumn, the Fed halting its tightening policy and the China trade tariffs, are still unresolved.

From a contrarian standpoint, all that cash represents massive buying power that could fuel a new leg higher if true optimism returns.  But as it stands now, we seem to be climbing a wall of worry. A rather steep one at that.