2018 was a difficult year for gold bulls, but 2019 is shaping up to be a very different year altogether.  Here are 5 reasons why gold’s prices are likely to move higher in 2019:

The world’s population keeps growing, and that probably continue for at least another 20 years.  The world’s current population is over 7.6 billion people, over twice what it was just 50 years ago.  Take a look at this chart of world population growth over the last 1000 years: 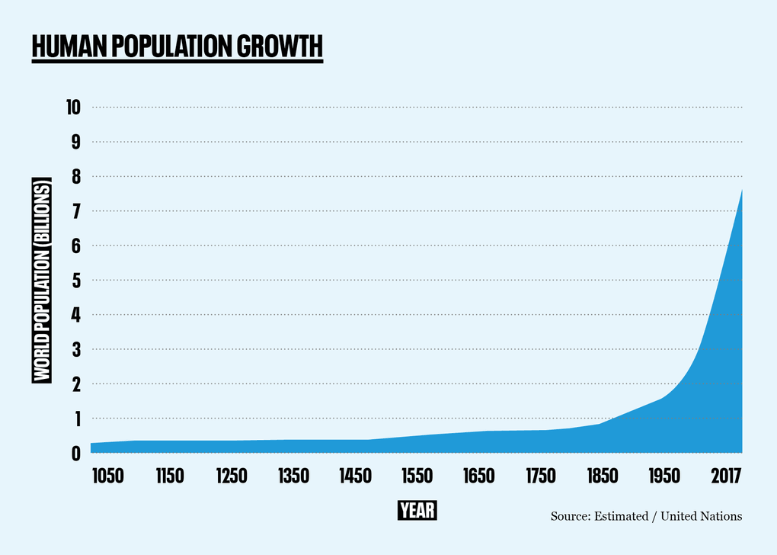 More people means more demand for practically everything – including gold.  As the current generation ages, they will probably follow the traditional investor life cycle, which means they will be buying things for retirement and storage of wealth – things like stocks, bonds, real estate, and gold.

Gold is most heavily prized in Asian countries, especially China and India.  Those countries are expected to continue to grow, so it follows that gold demand there will grow there as well. 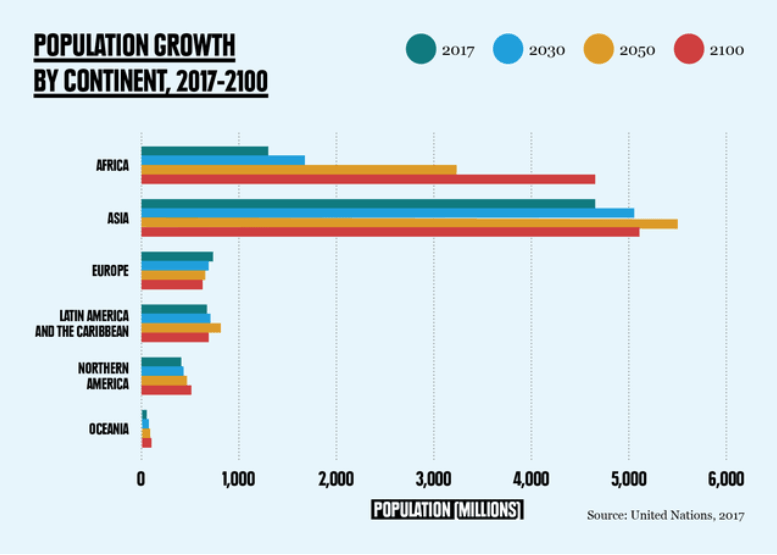 Peak gold is the idea that the easy-to-get gold deposits have all been found, and that mining gold in the future, will be costly. That said, it’s possible that the amount of new gold produced in the future will decline over time.  Several major market analysts have examined this possibility and concluded that we are now very close to peak production of gold; one analyst published this chart on Bloomberg showing their expectation for new gold production several years ago.  Notice that 2019 is expected to be the peak year – while that may shift around if they have the basic idea right, we could be very close to the top now.

How will we know if we are at peak gold?  The number to watch is the total of new gold produced each year.  If that starts to decline then we may well be seeing peak gold.

There are some factors that make peak gold difficult to predict.  The first is the price of gold itself. If the price of gold goes up, it can make more expensive mining operations profitable again, and that could add to the production of gold.  And, most of the gold ever mined is still available in the form of gold bars and such, so it could be that the world could reach a saturation point where it doesn’t need any more gold.  But with increasing population levels demanding an increasing amount of jewelry, and more commercial uses for gold being discovered every day in things like smartphones and spaceships, it is likely that the demand for gold will continue to increase over time.

Thus, any proof that we may really be at peak gold may cause a rally in the price of gold, as people, companies, and banks compete for what gold there is.

Modern economics depends less on gold than in earlier times, but there is still a need for a very basic, unchanging asset that can be easily measured and assessed. So far, only gold and land fulfill this role – and land only works if you ignore volcanoes and earthquakes (haha).  Only gold has the qualities of easy verification, high density, the difficulty of falsifying, and rarity. Those are the qualities that have made gold the go-to choice for storage of value for over 3,500 years. Even today, central banks buy gold when they need a rock-steady asset for their balance sheets.

Some central banks, of course, buy more gold than others. In the past decade, Russia and China have come to the forefront of the buying line, while the US has remained quiet on the new-purchase front.  Russia especially has been buying gold. You see, they’ve been using their store of US Treasuries to buy gold, essentially trading US Dollars for gold, which accomplishes two strategic goals at once: First, to reduce their dependence on the US Dollar; and second, to help secure the country’s wealth for the future. 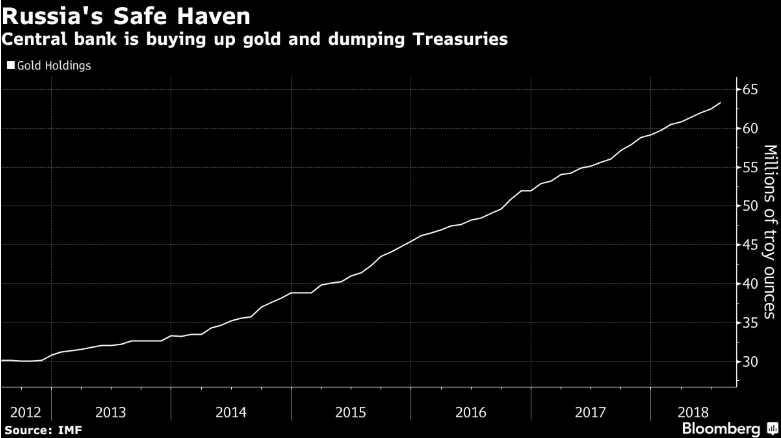 Some analysts believe Russia has actually traded the last of their US Treasuries, so Russia is no longer dependent on US Dollars at all.  Time will tell if this is true; remember that Russia bought a lot of US Treasuries on world markets back when the US and Russia were making nice in the Bush-to-Obama era.

China is a different story.  China has a national policy that prohibits the export of gold from the country, so the gold that goes into China tends to stay in the country.  Yes, some leaks out in electronics and jewelry exports, but nowhere near as much as goes in. And, much of the gold mined in China (or in nearby countries by Chinese mining companies) is bought by China’s central bank and is brought in as additions to the country’s asset base.  So we have to look at gold produced by China as not going out “for sale” on the world markets. This has the effect of reducing the amount of gold available in the world – which doesn’t matter much until the rest of the supply of gold drops (see Reason #4 above).

Anyone who has followed the gold market is familiar with the term “geopolitical instability.”  That means economic uncertainty on a global scale. Events like single countries having a currency crisis – think Venezuela in 2018 – tend not to have a big impact on world gold prices, unless the country is very large (Russia, China) or very important in a big economic region (such as possibly Italy or Spain).

The problem right now is the number of such countries is growing.  Italy is currently “negotiating” with the European Union about their country’s budget – the latest government wants to run a bigger deficit than the EU rules allow.  And if Italy runs a big deficit, the EU imposes fines that Italy can’t really afford. Think about it: You’re spending more money than you make, so you get hit with a fine.  But you’re already spending more than you make, so where does the money come to pay the fine?

Italy’s situation is just the beginning of the problems the EU faces.  Brexit threatens to tear Great Britain away from the EU in 2019, which removes one of the EU’s major trading countries from the mix.  In one sense it’s not a big deal, as Great Britain kept their own currency and did not subscribe to the Euro.

But in another sense, it’s a very big deal. Great Britain is a very large trading country, and their presence in the EU gave the EU a lot of strength and power.  Without Great Britain, the EU is weaker. Of course, the EU still has Germany, a powerhouse of a manufacturing country, but Great Britain’s exit opens the possibility that other countries unhappy with what the EU does will decide to pull out as well.  On balance, the EU is a set of debtor nations trying to lean on each other for support, but as Margaret Thatcher famously said, “eventually you run out of other people’s money.”

In 2018 we saw the EU save three failing Italian banks, who were “rescued” by being broken up and sold through the auspices of the EU.  Yet the country continues to struggle, and at some point, the EU will run out of “spread-around” money to paper these things over.

We believe the EU is the largest significant economic problem in sight, and we don’t see things getting better there any time soon.  So we expect gold prices to rise in 2019 partly because of insecurities coming out of the EU, as well as other unstable countries around the world.

2018 was a bad year for gold in the sense that prices went down instead of up.  But it was also a good year for gold technically – that is, in terms of what gold price performance said about the balance of supply and demand overall.  Let’s look at the price of gold over 2018: 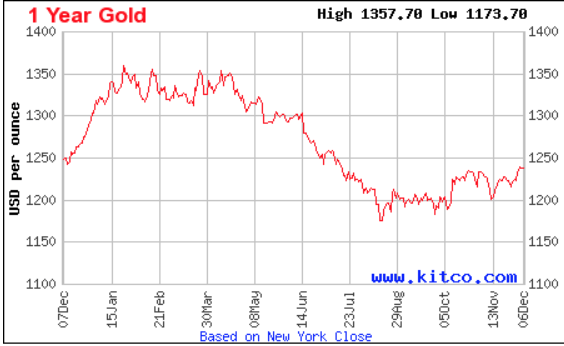 What we see in the chart is that gold only went below the $1,200 level for brief periods before recovering.  The low for the year was right around $1,100, and gold bounced off that quite handily. Even while equity (stock) markets continued to rise into early October, gold held along the $1,200 level, and as cracks started to appear in the US bull market gold began to show signs of life.  Technically, holding at support in the face of rising pressure, then rising as soon as the pressure is off is a sign of strength, and the chart of gold appears to have plenty of that.

BONUS: Gold is the “blood in the streets” sector

You remember the old trader’s saying “Buy when there’s blood in the streets.” Well, for most of 2018 the gold sector has been the “blood in the streets” sector.  Just look at this 6-month chart of GDX, an ETF that tracks the senior gold mining stocks. 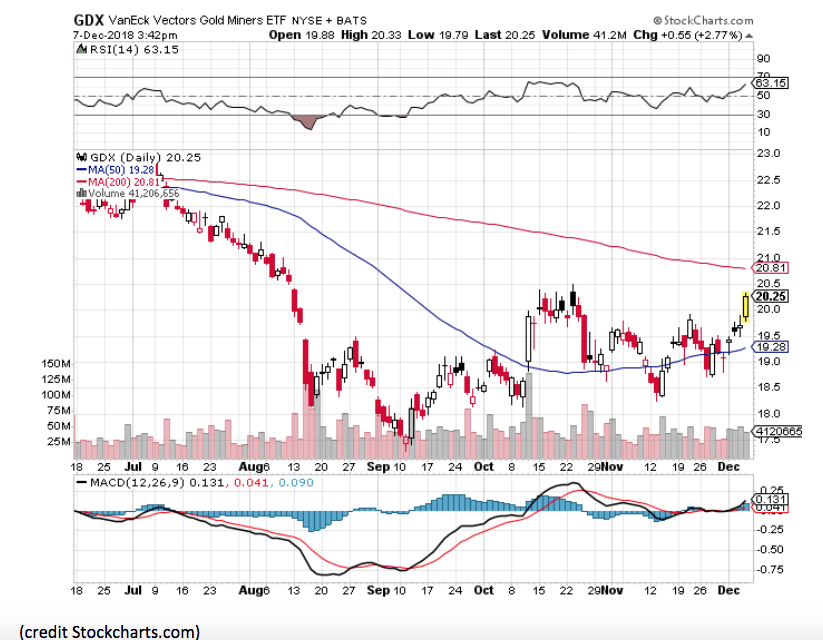 That’s clearly almost opposite this chart of the Dow Jones index over the same period. 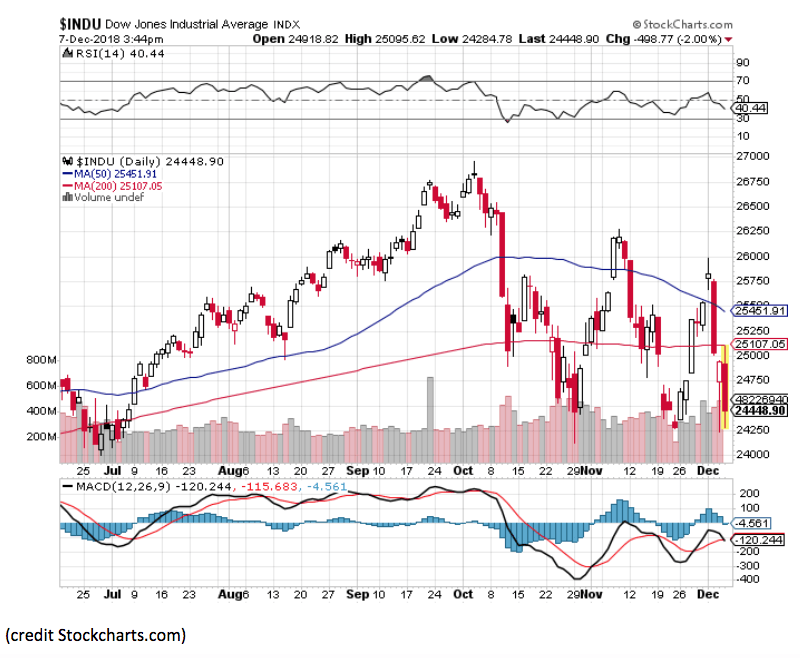 This chart says there is support for the Dow between 24,000 and 24,250.  Should the Dow breach below 24,000, we might just see a much bigger drop.  And when we do, investors will be selling their stocks old-faithful’s and looking for a profitable place to put their money.  The one sector that’s been consistently down when the market has been up is gold.