For all the recent controversy surrounding the NFL, from concussions to blown calls to politics, the Superbowl remains the most widely viewed event — acting as both a touchstone of consumer culture and for the economy’s pulse.

Everything from which companies are advertising and what tone they take, to the type, size and location of where people gather to watch, provides insight into the economy’s state.

With all that in mind, here are 3 Stock Plays to Make for the Superbowl.

The first stop on the play list is Wingstop (WING), which was founded in 1994. Famed Dallas Cowboy quarterback, Troy Aikman, was an early investor, scoring a huge profit when he cashed out in 2015 IPO, as shares surged some 60% on that first day.

The capital raised in the IPO was used to fuel aggressively, and now operates approximately 800 restaurants, mostly franchised, in the U.S. It has begun an international expansion with locations in Mexico, Singapore, the Philippines, Indonesia, the United Arab Emirates, and Saudi Arabi.

The company keeps it simple, a menu composed of wings (boneless too) and fries, with a large variety of flavors and sauces. The décor is minimal and most orders are takeout.

This year, the Superbowl could be a big win for the chain. Last November, the company rolled out national delivery in 12 large cities, and partnered with Doordash and other third-party delivery services.

The mobile delivery option should be a game changer and help it compete with the likes of Dominoes for the home viewing parties. Wings are second behind pizza as the most popular Superbowl food.

One issue might be margins as the there has been a surge in the cost of chicken wings has run up some 30% in the past month.

Last year Buffalo Wild Wings, which was taken private last year, was caught by surprise by a similar price squeeze.  Hopefully, WingStop learned from that companies experience and has locked in the inventory they’ll need.

The stock has enjoyed a great run, up some 80% over the past 18 months, and sports a very rich 68x p/e multiple.

But, if the company can show a successful surge in deliveries this Sunday, it may prove it’s not a fad and is ready for the big leagues of being an international branded chain.

People need something to get themselves in a party mood, and most likely that involves the consumption of beer or liquor, and increasingly some form of cannabis.

Constellation Brands (STZ) has you covered on all fronts. It’s the world’s largest beer, wine, and spirits companies. Last August it took a high profile, $ billion 35% stake in Canopy Growth (CGC), a Canada based cannabis company.

The move into cannabis was a both strategic and defensive. Beer sales have been slowing for years, though STZ’s portfolio of brands, which emphasize Mexican labels such as Corona and Modelo, have done better than competitors.

Some of that slowdown can be attributed to the growing popularity and preference for cannabis.

While this year it won’t register much on STZ’s top or bottom line, I can see it doing so for years to come when cannabis-infused beverages and edibles become featured fare on gameday — both in the home and at restaurants.  It could even spur a new breed of fusion sports/cannabis bars.

Best Buy (BBY) is the leading electronics retailer chain with physical stores.  In recent years, has done a great job of combatting the Amazon and the ‘showrooming’ effect.

It has accomplished this mainly through two initiatives, online price matching and by providing great customer service including installation.

The stock has declined over the past few months on concerns of slowing iPhone sales and a trough in the upgrade cycle for flat screens. 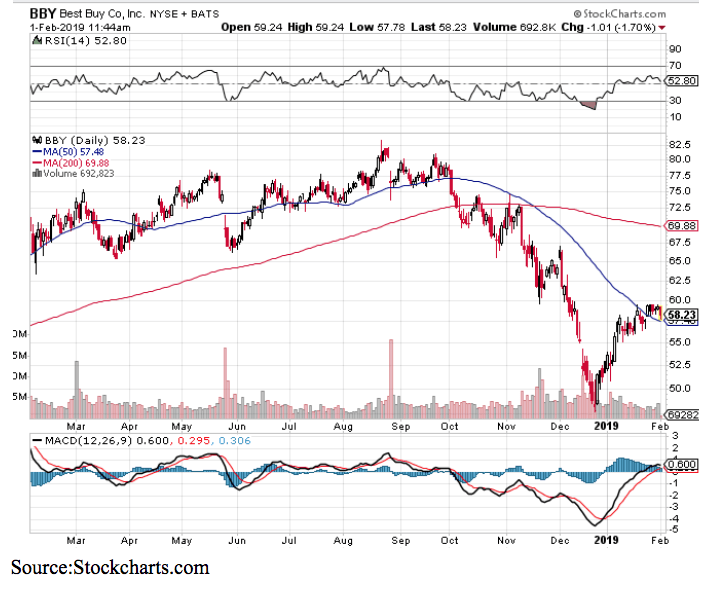 But BBY still posted strong holiday sales and will likely see a boost ahead of the game with gift cards and promotions spurring sales.

The company has shown it can survive and thrive in the age of Amazon and this 30% decline in shares should be seen as a buying opportunity.