Gold traders are on the edge of the dreaded Trader’s Dilemma.  Though I haven’t heard it called this yet, everyone who’s traded longer than 3 months has got caught in it, and no one seems to like it.  Here’s the picture: 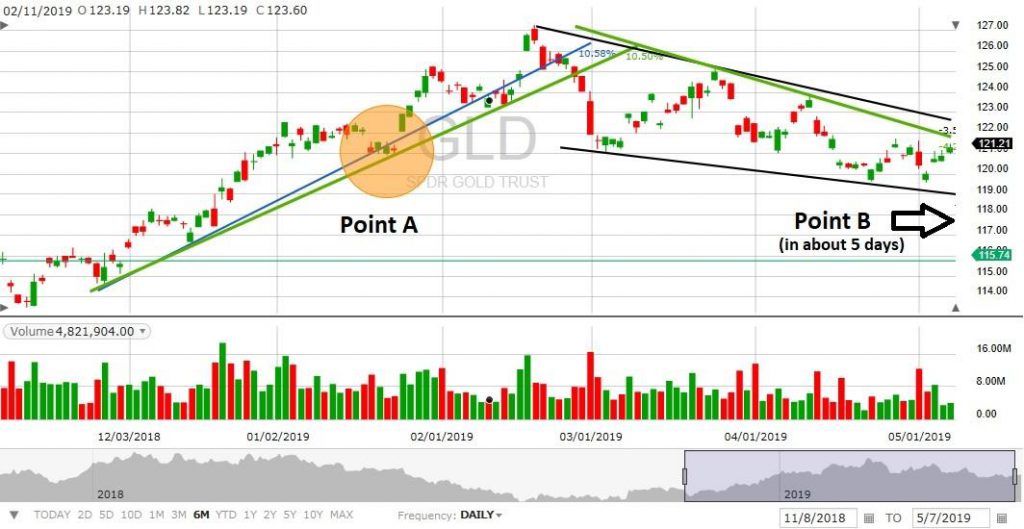 (credit: Fidelity.com and my art teacher)
Let’s start on the left side of the chart.  As gold was rising in December, every technician would have drawn the blue line as support.  After all, it runs along the two bottoms, which is the definition of support.
But then along comes Point A – that dreaded just-barely dip below support.  Do you sell?  Go short?  Sell half?
The common answer is to set a stop below the line that is a consistent amount from trade to trade.  Something like 3%, or 5%, or more.  Or, a standard amount based on — well, something.  Mathematically sophisticated traders might use a trailing stop computation that updates daily or weekly. But the idea is the same – if the price drops below “there” you get out, to preserve profits and protect against losses.
And to make it worse – If you came along after Point A, you’d draw the green line instead of the blue line.  Because now the low-bottoms are different than before, and you get a different line.
But the dilemma is still there – When do you sell?  Because you have to at some point, or you’re in for any ride down that comes along.  And you don’t want to get caught in a 1929 or 1999 or 2008 downdraft when you’re 100% invested.
Which brings us to the present.  Most gold traders are now either out of the market, short, or in with small positions.  When do you decide the market might be turning and start to get in?
Gold is in a declining wedge pattern right now.  Nobody likes to go long as prices are falling, that’s a fool’s game.  You want to buy when you see signs of a bottom, whatever that may mean in your trading method.
In a declining wedge, it usually means a break above the resistance line of the wedge.  But at this point traders could draw either the black line or the green line, depending on when they started watching gold.
Which do you trust? After all, you’ll have to put down your own hard-earned money.
Now there’s a dilemma.  And at the current pace, the break up through resistance can happen anytime over the next 5 days.  That’s Point B…
Happy trading,
The Gold Enthusiast
DISCLAIMER: The author has no positions in any mentioned securities.  The author has small long-gold holdings in NUGT, JNUG, and a few junior miners.  He is not expecting to trade any of these in the next 48 hours unless the conditions cited in the article occur.