After 2018’s worst market performance since 2008, the S&P 500 has managed an impressive 16% rally in 2019 and is up 24% off December’s frightening lows. I think we can all agree that it’s great seeing our portfolios rising so strongly and quickly.

But with valuations now historically elevated, and plenty of risks still ahead of us, many investors want to know how long and strong this rally might be in the coming weeks and months. While there are no certainties on Wall Street, let’s take a look at the good news and bad news surrounding this rally. And more importantly, find our how smart investors should be using these boom times to prepare for an uncertain future.

The Good News About This Stock Market Rally

Most of this rally has been justified thanks to the market’s valuation (based on forwarding PE) hitting a very low 13.7 in December. For context, the S&P 500’s lowest forward multiple in the 2000 tech crash bear market was 14.2. Most bear market’s (other than the Financial Crisis) see stocks bottom at 13 to 15 times forward earnings expectations.

So December’s lows were literally bear market conditions and sentiment, driven by worries that a recession was coming in 2019 and earnings would crash. 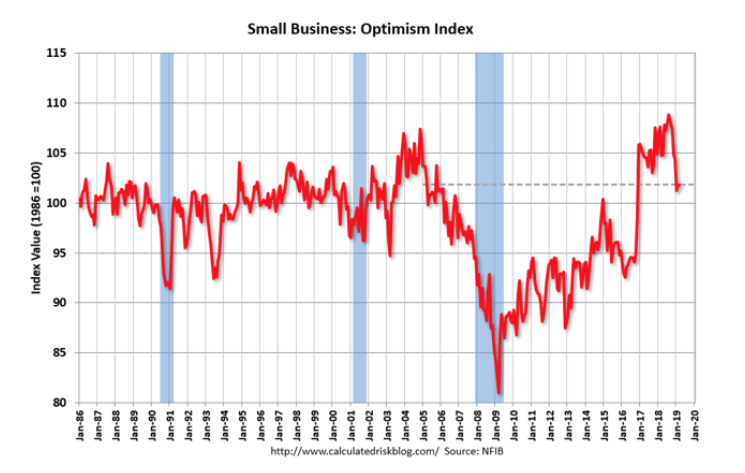 However, while it’s true that small business (who hires most Americans) sentiment is way down from recent record highs, it’s also recently stabilized at the average level during this expansion. Large companies have also been showing confidence as seen by higher than expected reading in both manufacturing and service PMI surveys. 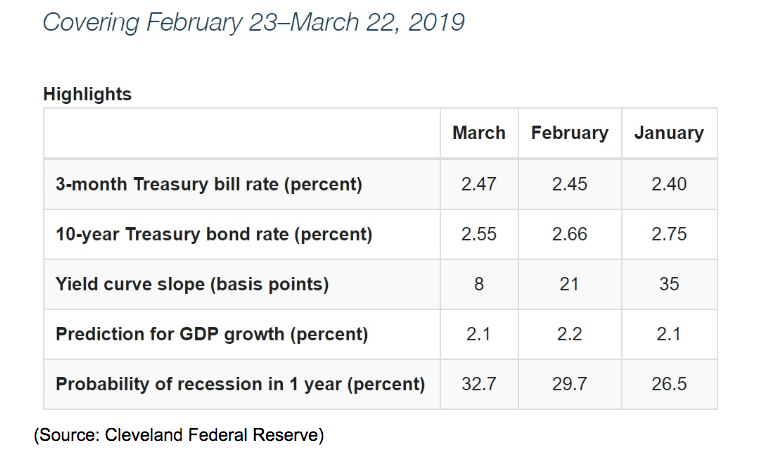 Meanwhile, estimates of recession risk over the next 12 months currently range from about 33% to 50%, depending on the model. That’s the highest levels in 10 years, but the Cleveland Fed is estimating that, based on the most accurate recession predictor in history (10y-3m yield curve), the probability of a recession (and thus bear market) arriving by March 2020 is about 33%. The yield curve has recently stabilized at high single/low double digits, which according to the Cleveland Fed means about 2.1% GDP growth in 2019. That’s on par with the 2.3% average growth rate seen from 2009 to 2017. 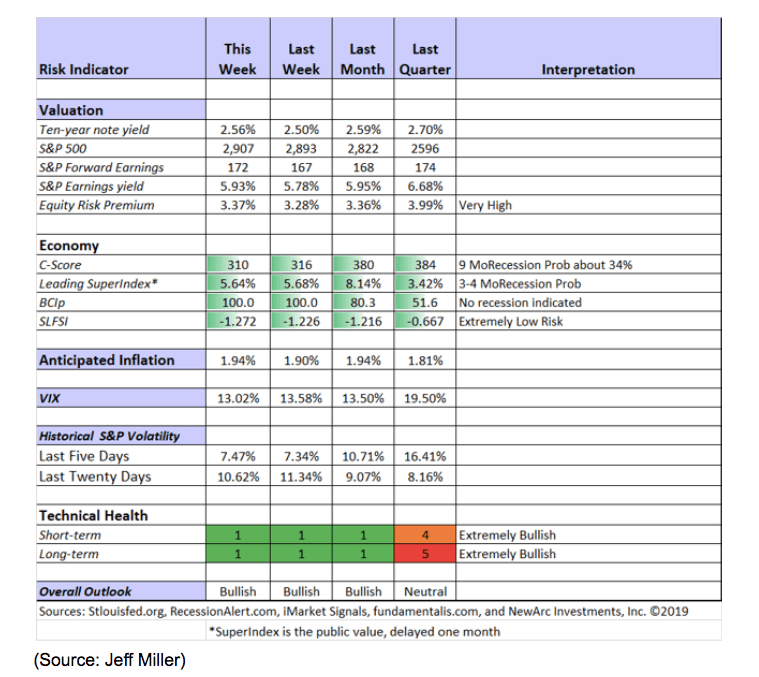 And we can’t forget that analyst earnings expectations have been coming way down in recent weeks. According to Factset Research, analysts expect -4.3% EPS growth in Q1, and slightly negative growth in Q2. 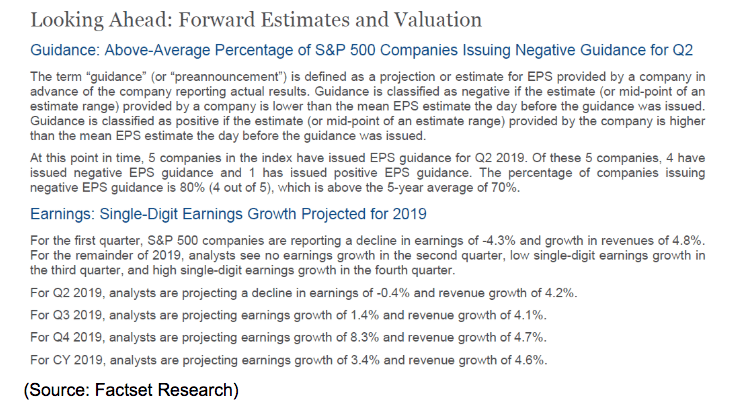 EPS growth estimates may have overshot to the low side which is why, of the 6% of the S&P 500 that reported earnings as of Friday, April 12th, 83% have beaten expectations. In other words, corporate America has a very low bar to clear, and if they can deliver better than expected top and bottom line results, then stocks might keep grinding higher.

That’s especially true now that it appears that a trade deal appears to be coming at the G20 summit in Japan in late June. While it’s always possible that the final deal might underwhelm, expectations are running so high that one is imminent (based on reporting from Reuters, the WSJ, and Bloomberg) that it might create a “buy the rumor, sell the news” like scenario.

With the Fed having called off further rate hikes, and the bond market now thinking the next change in rates is a cut, we’re possibly creating a perfect storm of positive short-term sentiment conditions that could keep stocks marching slowly, but steadily higher.

But while that might sound wonderful, and potentially make for a pleasant few months, there’s also bad news about the current rally, that might end in another painful correction.

The Bad News About This Stock Market Rally

The biggest downside to this rally is that it’s been extremely shallow and NOT driven by US stock fund flows. It might surprise you that stocks can rally 16% while investors pull money out of stock funds, but between the start of the year and April 2nd that’s just what happened, to the tune of $39 billion. 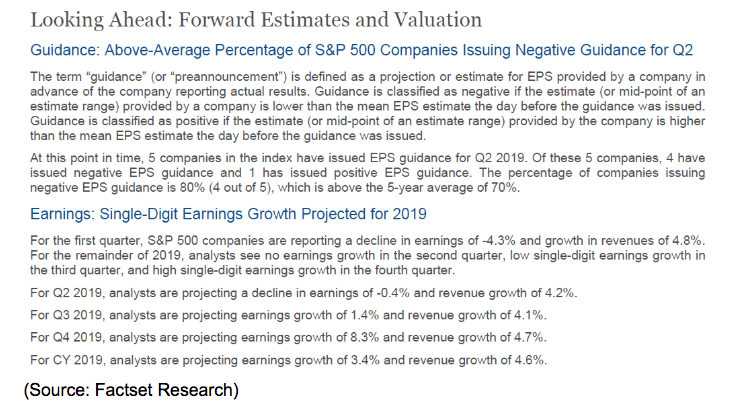 How can stocks rally over 20% in the face of retail investors pulling money out of stocks? While it’s impossible to know for sure the answer lies with the fact that stock prices are set at the margins, meaning based on the latest trade.

Analysts think two things, in particular, might have been driving this low volume/low volatility rally. The first is buybacks. According to Factset Research, in Q1 US companies repurchased $227 billion in stock, a record and up 59% from the $143 billion seen in Q1 2018.

The other possible catalyst for this market rally was hedging by institutions, specifically when it comes to the sale of call options or the purchase of put options (think portfolio insurance). Brokers tend to hedge the other side of the trade, and skittish investors, not trusting the rally, have been buying insurance forcing their brokers to hedge, and in the process buying stocks.

Well, guess what? According to Lipper Financial, the week of 4/10 saw the first US stock funds net inflows in 2019 ($4.3 billion worth). But wait a second? If the red hot Q1 rally, the best in a decade, occurred with investors pulling money out of stocks, and now they’re moving money into stocks, doesn’t that mean the rally might not just continue but potentially accelerate?

Indeed that’s true. But here’s another way to think about it. Back on December 24th, the correction low, the S&P 500’s forward PE was trading at 13.7, which is roughly the earnings multiple seen during bear market bottoms. The entire rally has seen investors not just sit out the rally, but sell into it. Now that the market’s forward earnings multiple is 16.7 to 17.5 ( based on which analyst data sets are used and compared to a 25-year average of 16.2) “dumb money” is starting to rush back into stocks because investor sentiment (based on several surveys and methods) appears to be getting euphoric.

CNN’s fear and greed index (based on 7 technical metrics) recently peaked at 74 (one away from “extreme greed”) and has pulled back to 66 recently. A potentially potent combination of earnings beats, a trade deal, and positive fund inflows, could cause a “melt-up” situation akin to January 2018.

That’s when the fear and greed index hit 90, and historically when it gets above 80 a correction isn’t far off. At the time investors were gripped by a fear of missing out, and even bears were conceding that “there is no alternative” or TINA to buying stocks, valuations be darned (forward market PE hit 18.7).

That might be what’s about to happen, and while such a scenario might be fun while it lasts, it will almost certainly end in stocks deflating in a hurry later if prices outrun fundamentals too much.

So here’s how smart investors can use the current rally, no matter how long/strong it proves, to maximum benefit.

What You Should Do With Your Portfolio

The best advice for any regular investor when it comes to the question of “what should I do with my retirement portfolio” is “nothing”. But that assumes that your portfolio is well constructed. That means not just well diversified in stocks, but that your asset allocation (mix of cash/stocks/bonds) is also reasonable for your risk profile/long-term goals. 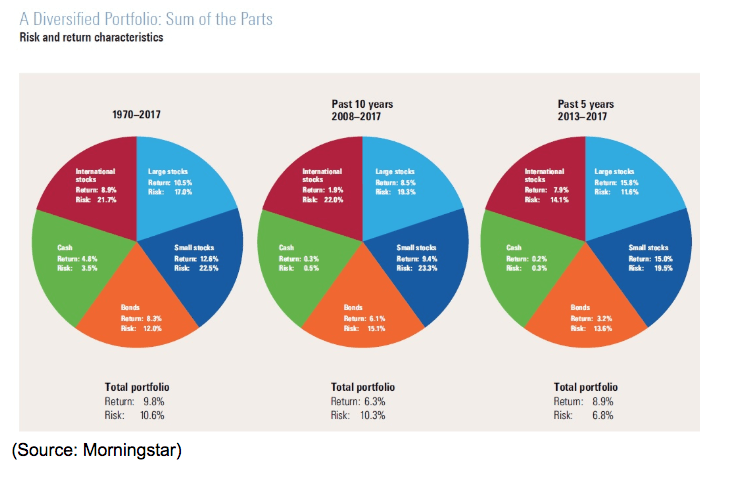 This model portfolio from Morningstar, which is well diversified into cash/bonds, and stock ETFs (including both US and foreign stocks) managed to deliver 9.8% annualized returns from 1970 to 2017 while suffering just 10.6% average standard deviation (volatility). In contrast, the S&P 500 delivered 10.6% annualized returns, but for that 8%, better annual performance investors had to endure annual volatility of 17.1%.

On a risk-adjusted basis (total returns/volatility) the diversified portfolio outperformed the S&P 500 (an all-stock portfolio) by 50% annually over that 47 year period. The point is that diversification is the closest thing to a “free lunch” as you can find on Wall Street. In this case, that means owning the right asset mix, including boring but highly stable and non-correlated assets such as cash (t-bills) and bonds (like US Treasuries). 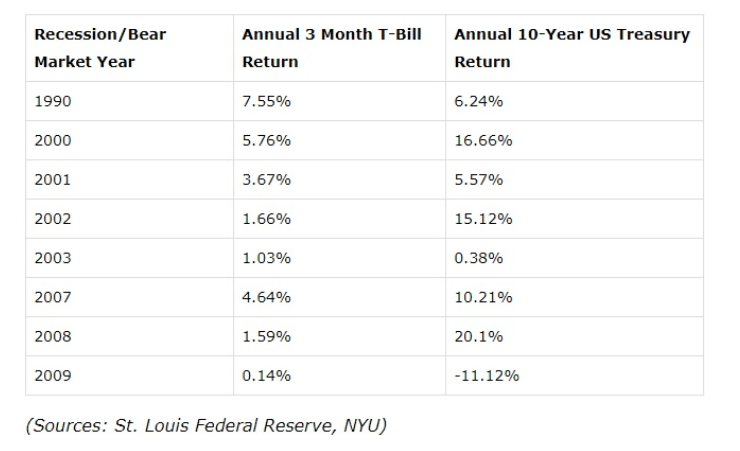 Cash and bonds tend to be counter-cyclical to stocks, rising or remaining stable when the market crashes, such as during recessions and bear markets. 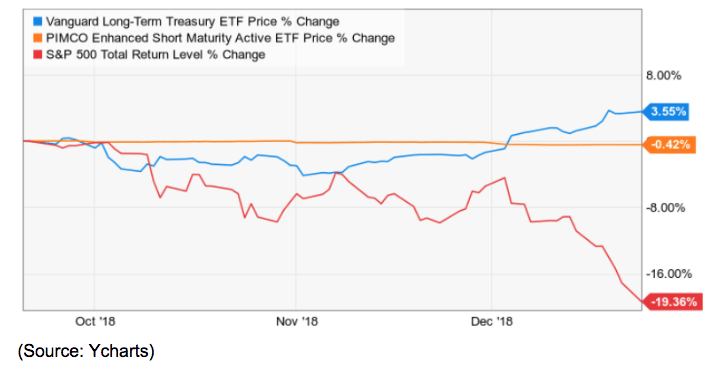 The same is also true in corrections, as seen during late 2018. The thing to remember about asset allocation is that your ideal mix of cash/stocks/bonds is going to be unique to you (consult a certified financial advisor who is a fiduciary to figure out what a good asset allocation is for you). That allocation will change over time and because stocks and bonds are constantly changing in value, you need to rebalance your portfolio periodically (such as once every six months or once per year).

If your retirement portfolio is already well constructed, then stick to your long-term plan and don’t be afraid to keep buying stocks. But never forget that valuation always matters so don’t blindly buy into a broad market rally via ETFs that own the S&P 500, but use sector ETFs to target unloved industries or buy individual blue-chip stocks that are historically undervalued. That’s where my weekly “best dividend stocks to buy right now” series of watchlists might prove handy.

Bottom Line: Stocks Might About to Get Euphoric So Take Any Such Opportunity to Recession-Proof Your Retirement Portfolio

2019’s rally has largely been justified by the fact that economic fundamentals appear to be stabilizing at about 2% growth levels, and stocks started out the year at historically undervalued levels.

And thanks to earnings expectations now being so low, it’s possible that a higher than usual amount of earnings beats over the next few weeks could help stocks achieve new all-time highs and close the door on the worst correction in a decade.

But the bad news is that most of this rally has been shallow, and low volume. Despite the fast and consistent rise in stocks, retail investors were mostly pulling their money out of stock funds, and the rising share prices appear to have been the result of buybacks and institutional hedging.

Now the fund flows have reversed with retail investors finally feeling confident enough to get back into stocks. While that’s possibly a reason for the rally to last a few more months and potentially get much larger, it’s also a classic example of “dumb money” chasing higher prices due to a fear of missing out or FOMO sentiment.

The trouble with such rallies is that they typically result in investor sentiment becoming too euphoric, and valuations climbing to absurdly high levels. While the best rule of thumb for most investors in terms of “what should I do with my retirement portfolio” is usually to sit pat, if stocks are indeed set to melt up in the coming weeks that is a great opportunity to take a look at your overall asset allocation.

If December’s correction showed you that your portfolio was too stock-heavy (in terms of asset allocation) then a red-hot rally is just the time to trim your equity holdings and rebalance into more bonds/cash. Remember that risk management is critical to long-term investing success and proper asset allocation is essential to both being able to sleep well at night in a recession-proof “bunker” portfolio, as well as potentially take advantage of great bargains in the future.

If you have new savings or dividends to put to work, then avoiding the recent red hot growth darlings in favor of dirt cheap blue-chips (like healthcare stocks) is probably the best use of new money today. 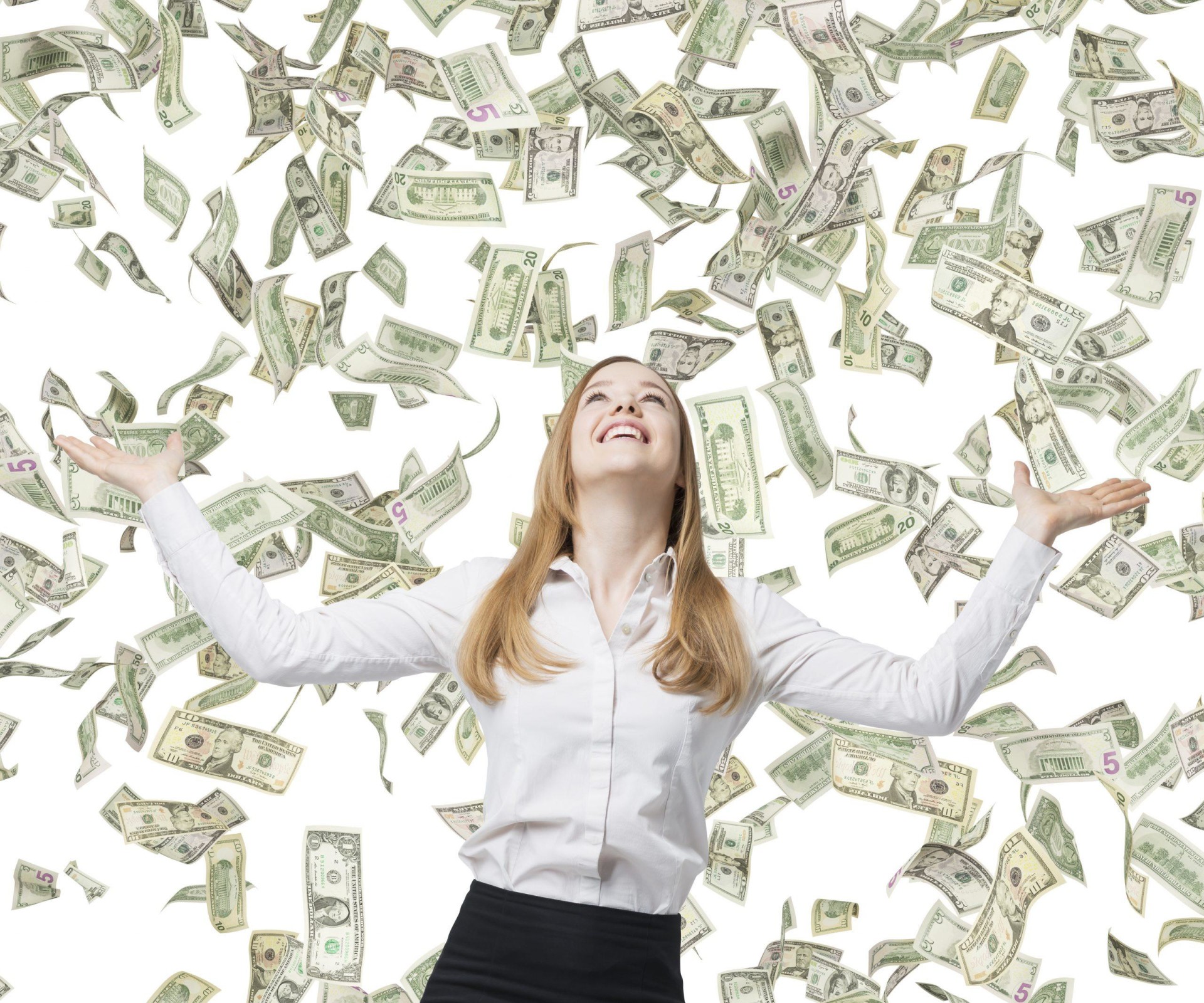 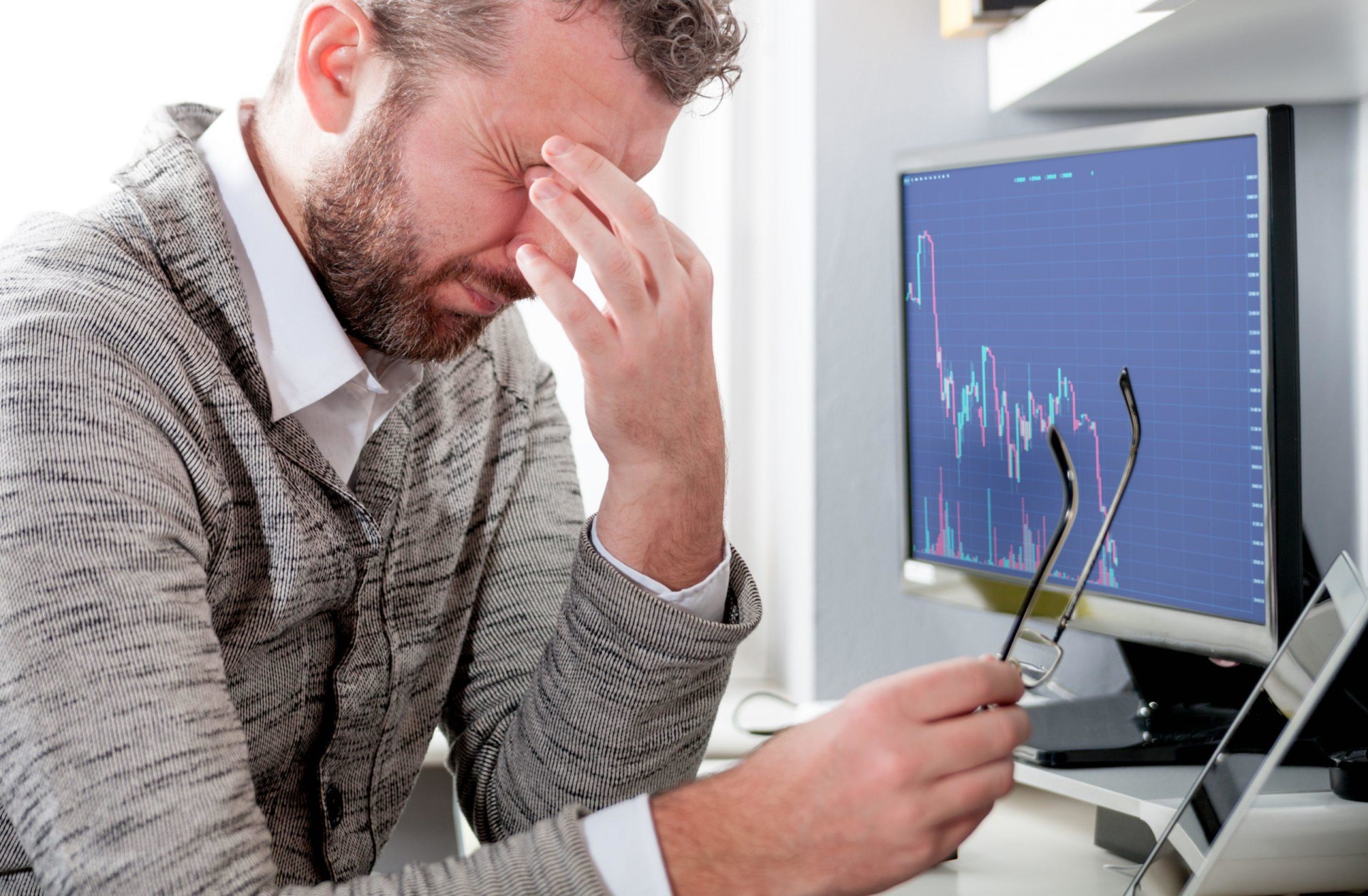